Note / MvW: ‘I was walking outside my studio with a glass bubble in my hands. The farmhouses and cows reflected in it like a film. In the end I was unable to do anything with this and threw the mirrored bubble in the ditch out of desperation, where the thing remained floating. I liked how it looked in the middle of the duckweed and took a photo of it. Later I thought of also throwing a few smaller bubbles in the ditch and gave the photo the title In thought.’ Because of the way in which In thought came about, the artist says that the photograph is, in fact, a representation of the moment of disoriented ‘thought’ before an actual idea forms. 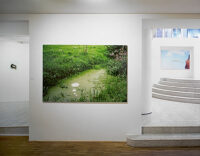 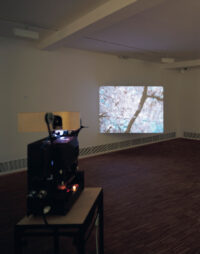