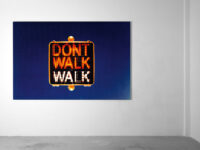 Note / MvW: ‘I stood waiting at a pedestrian crossing on 5th Avenue and saw that both signs were lit simultaneously. That resulted in comical confusion. I immediately wanted to make a film of this. The New York Police Department provided me with traffic lights that could be switched on and off manually. The film I made with this was rather dull so it eventually became a photograph.’